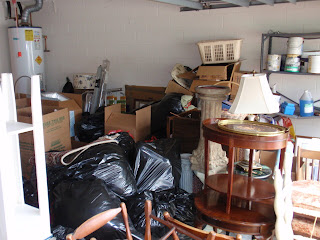 Is this what one’s life amounts to in the end? A dear friend passed away 7 months ago and the process to clean out her house had been daunting on many levels. The range of emotions that I’ve gone through during the process is quite interesting when I look back on it, but then again I’m sure that it’s also the grieving process as well. I won’t deny that there has been so much anger while packing her things/belongings.

Seriously, what do your belongings become afterwards? Yes, we’ve had family and friends come in and go through her stuff to pick and choose what they may like. Some of it we did to keep as a reminder; other stuff we took because we may have liked it or thought that we could utilize it. As I’m writing, I’ve noticed that I’ve used the word ‘stuff’ – but that’s all it comes down to it – stuff! Stuff someone has accumulated and stuff someone else may want. Geez, almost sounds like we could go into a George Carlin routine here, but I digress.

So much has been gone through. Actually, every nook and cranny in this house. Now I’m here for the final packing and removal. Except for the furniture that’s left in the house, this is what’s left of her life - in the garage. I’m sorry, it appears to be a sad testament to one’s life, but I know the same will happen to mine at sometime in the future as well. And it’ll just be stuff that people will forage through to see what they may like and discard the rest.

You may wonder what is the point of this post? There really isn’t any, just basically my miscellaneous meanderings about our life or what happens afterwards. I apologize in advance if the tone here is somewhat somber, that is not my intention. But I guess when you speak of death, what else can it be?

We surround ourselves with things. And obviously I’m referring to inanimate objects. We are masters of conspicuous consumption. Buy, buy, buy!!! Probably the majority of what we buy is not because we actually need it. I’m not going to blame this on our societal changes. But, if you look back, you will notice that we changed our lifestyles greatly with the advent of available credit. First it was with credit cards; then came the HELOC’s (Home Equity Lines of Credit); and, then the easy mortgage. Unfortunately, I think this has led us to really become a debtors society, where the majority of people have more debt than they do assets. 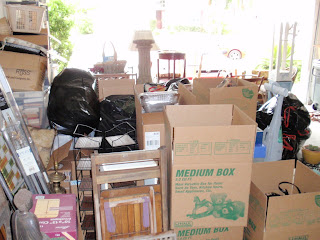 What happened to living within our means? What the heck is the big deal with “keeping up with the Joneses?” Seriously, are they putting food on your table? So going into debt and buying conspicuously will allow you to supposedly attain a certain social class or socio-economic status? But do we actually stop and look at the cost of such? Again, do you seriously believe that trying to buy your way up the ladder, will actually get you there?

I had an acquaintance once who felt that he had an inalienable right to things. That he was deserving and had a dutiful right whether he attained the goods or that he was owed it by others. It didn’t matter if he could afford such.

Do you think that our present economic situation is due to this kind of mentality? If you think not, than you are only deluding yourself. I apologize if that appears terse, but we need to reevaluate ourselves and what we are doing. First off, it’s only fair to the children. What kind of legacy are we leaving them? They deserve the same fair rights and choices that we’ve had, but not if we leave them a major debt ridden society.

Things need to change. They should have changed years ago, but that’s over and done with. Tomorrow will be too late. It needs to be done NOW!!

Till next time – Marc It Sold!