Offshore Oil Drilling – Bring It On –NOT!!!

The title sums up what I have to say on this topic. Additionally, this is quite unusual for me to touch upon politics except when it pretty much immediately relates to real estate. Part of my writing this article is two-fold. Firstly, because the idea itself is abhorrent to me. And secondly, because here our government goes again selling out to big business. Seriously now, they are the only ones that are going to profit from this.

With that said, I’m quite disturbed with the notion of our ending a 27 year moratorium on offshore drilling that was actually signed by Pres. Bush’s father and he is currently asking for congress to end. But before we go on with this part of the tale, let’s look at the implications of Offshore Drilling.

Gas prices are high and it’s affecting all of us. Unfortunately, those with less income are affected the most. But the fact of the matter is that gas prices are high and will remain so for a very long time. That’s just a simple fact. Even with Saudi Arabia stepping up their production, it will have little effect on the price of crude oil in the overall scheme of things.

For arguments sake, let’s say that we allow offshore drilling. Actually, let’s stop for one second for a further explanation, we are not just talking about offshore drilling, but that of also drilling in the wilderness. OK, with that said, if we were to drill, it would take 7-10 years before we’d see any results. On top of that the oil that can be uncovered will most likely not have much effect on prices anyway.

Now granted, we do have a major stockpile of crude. So much so, that at today’s consumption it would last us 2½ years. Maybe the government should consider tapping into that as opposed to our environment? Just a thought! I’m not suggesting depleting all of the reserves, but…

The purpose here is not to sway anyone from one party to another. It is not intended to be a political debate. It seems the two prospective presidential candidates are both on opposite sides of this issue. Sen. McCain is following in the President’s footsteps.

What really bugs the bejesus (see I said a nicer word that I really would have liked to say) out of me, is that I hear the Governor of Florida, Charlie Crist, doing a complete turnaround in an apparent political pandering to Sen. McCain because he’s looking for a place on his ticket or in his cabinet. Oh yes another, our illustrious Senator, Mel Martinez, has also supposedly changed his mind and is backing the removal of this moratorium. But we won’t go into his background and his abysmal stay at HUD.

It appears that a good part of this election will be putting the fear in people, just as we’ve seen in previous ones where they utilized so-called ‘terrorism.’ We know that a good part of that turned out to be a bunch of bunk, but by then it was too late. I hope again that history won’t be repeating itself as it so often has.

In his Gettysburg Address, President Lincoln stated that we will have a “government of the people, by the people, for the people.” The sad thing is that in this day and age we need to change the word ‘people’ to ‘big business’ and the saying will have a more accurate meaning. It doesn’t matter how this drilling will affect the general population. That’s of little or no consequence. Is it any surprise that we’re consistently widening the wealth disparity gap in this country?

Enough, let’s get back to the original premise here. The possible harm and destruction to the environment is too great a price to pay. We need to seek other alternatives and learn to wean ourselves off of petroleum based products. I am more concerned about global warming and the impact of fossil fuel on our lives and environment. 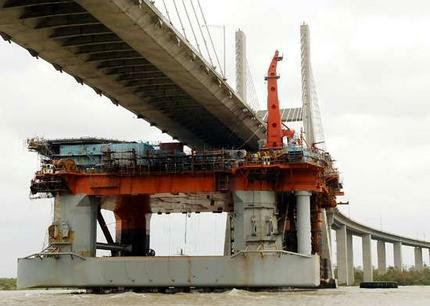 I have great concern that a major mistake will be made by opening up our shorelines and wilderness to the drilling for oil. The impact to our environment and lives can be more costly than the price of fuel itself. This is not something that should be taken lightly. Granted, neither should what we are paying for the price of fuel, but this type of consumption has been the American Way. Seriously, did we, as an overall society, learn a lesson from the embargos of the 70’s? Obviously not!

We need to wake up, if we haven’t already. The ‘Me’ society is over with. This idea of conspicuous consumption needs to be reigned in. What kind of legacy are we going to leave to our children? Yes, we as a society have progressed so very much, but at what cost? Enough already, or there won’t be any roses to smell!

This makes me sick about politics...

"What really bugs the bejesus (see I said a nicer word that I really would have liked to say) out of me, is that I hear the Governor of Florida, Charlie Crist, doing a complete turnaround in an apparent political pandering to Sen. McCain because he’s looking for a place on his ticket or in his cabinet."

What a spineless brown noser... Crist is about the lose the support of the entire state of Florida.

Thanks for your comment! Yeah, I think that about sums it up!

I'm assuming that by the "wilderness" you are referring to ANWR. But, it isn't a "wilderness", nor is it pristine. It looks like a Target parking lot in Duluth, MN for most of the year, and for the remainder is is a mosquito infested mud pit. The video and pictures that are continually shown on TV are over 100 miles from the area in question. In fact, the area in question is called Area 10-02, and was set aside for the purpose of oil drilling in the legislation that created ANWR. And, it is proportionally smaller than the size of a football on a football field.

Also, there are a lot of analysts that feel there is currently a bubble in crude oil. It is very possible that the simple act of starting down the path to energy independence may pop that bubble and seriously drop oil prices.

Finally, the horizon for production is closer to 3-5 years for the vast majority of the drilling.

Lane - As to the wilderness, thanks for updating us in regard to Alaska, but there is also proposed drilling down in the lower 48, particularly in the NW.

That's interesting that you've read that the drilling is closer to 3-5. Someone wrote on another post that it was 5-7 and I read on several accounts that it was 7-10. Since I'm not into oil exploration, I have to wonder which is really the closest.

I agree with you about the prices lowering while "heading down the path to energy independence." But can't this be done without more drilling on our shores.

I've read in a couple of places that the amount of oil that we could unearth, would not be enough to effect prices of crude.